Me' Hearties on a junk at Ha Long Bay!

I’d love to be able to write about how amazing Hue is as a city, about all its culture and history, about how its Forbidden City was just as good to look around as the one in Beijing – but I can’t.

That’s mainly because there was only one bit of Hue a large group of us saw – a bar named DMZ. Located a few blocks away from the hotel, it was where we headed during a brief respite in the rain to get some lunch. The only problem was, they had a special offer from 4pm where you get a free bucket of vodka and lemonade. Well, it would be rude to turn it down!

A flaming B52 - and so the sightseeing problems began

Colin, Sarah, Ricky, Malcolm and I had every intention of taking in a bit of culture. Instead, we took in far more Flaming Dr Pepper, Double Flaming B52, Flaming Jagerbombs and delicious Skittle Bombs (Cointreau and Red Bull – try it and taste the rainbow!) than we really ever should do in the early evening.

It was accompanied by more pool, and a particularly shocking game where I was seven-balled for the first time ever, much to the delight of everyone who saw it, by our resident tour pool shark Ricky, and after a few more cocktails we decided to head back to the hotel to meet everyone for dinner.

Twenty minutes later, we were on our way back to the same place – its where Fon our guide had booked a table for the night, so with more free buckets of vodka and lemonade, we were well on our way for a big night.

I somehow managed to regain a bit of form on the pool table later in the night, with a six game unbeaten streak and knocking everyone from Aussies, Kiwis and locals off the table, as well as Malcolm who managed to pot the black on about his second shot, but by far the strangest incident while I was at the table was a bit of rough justice by the bar staff on a Vietnamese bloke who didn’t want to pay his bill.

Dragged off a chair, and making a failed bid to grab a pool ball, he was promptly thrown flip-flop-less into the street and whacked with another pool cue a bouncer had grabbed from behind the bar. Something told me its not the first time they’d dealt with unpaid bills in this manner – and a few of us made sure we kept paying for drinks as we ordered as a result!

With departure not until mid afternoon the following day, Ricky was intent on carrying on after DMZ. It wasn’t long before Emma from Wales, who joined the tour in Saigon, signalled the end of our stay there by collapsing on a table and ending up in a heap in the corner. Undeterred, she managed to stay with us as we all ended up finding a late night bar called Brown Eyed Girl – it was a bit of a dive, but the beer was cheap. 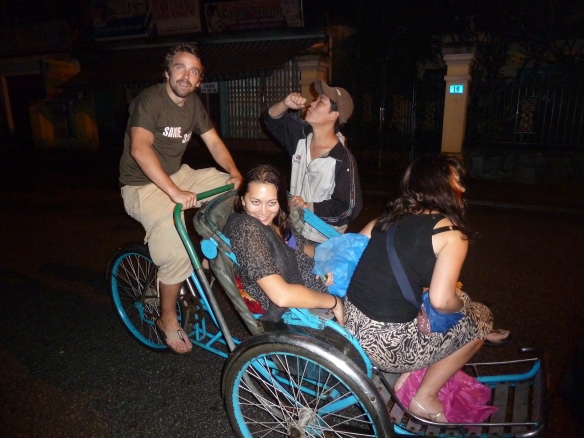 Ricky drove but still had to pay

It had gone 4am by the time we stumbled out and into the basket of a local cyclo rider, while Malcolm and I got a lift on the back of a motorbike taxi. Back at the hotel, Malcolm decided he was sober enough to ride the motorbike, and stupidly the taxi man let him. He promptly fell off and had to pay up for the damage. I had a less eventful but enjoyable chat with my parents and nanna on Skype until around 5.30am, when it was definitely time for bed!

The next day most of us woke up just before the midday checkout, and unsurprisingly headed straight back to the DMZ bar for lunch. Ricky and I demolished both a pizza and a burger meal, while everyone else filled up ahead of the overnight train ride to Hanoi.

The transfer to the station took us past the Forbidden City, so at least we saw a bit of it. Our guide Fon was laughing – she knew very few of us had seen anything of the city, but I think she knew we also needed to let our hair down a bit, especially with all the rain. Without getting wet, there wasn’t much else we could do apart from camp out in a pub!

The train to Hanoi was scheduled to leave at 2.43pm, but as could be expected, it was running an hour late. A few of us had planned an evening of poker onboard, so we were hunting for poker chips at the local stalls. Unsurprisingly, there were none to be found, so having weighed up the ideas of playing with boiled sweets, peanuts or Bombay Mix, I spotted something hidden away at the back – cotton buds.

Everyone agreed, and £1 down and two packs of cotton buds later, we were waiting on the platform for the train. There were a lot of locals waiting too, while others walked towards us along the tracks, using the rails as a convenient cut-through. 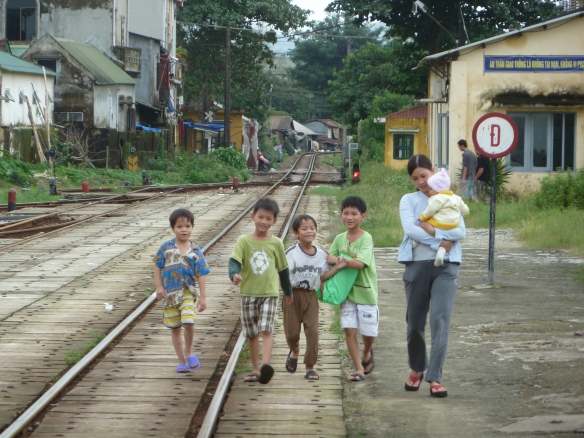 A group of Dutch tourists were also waiting alongside us, who then caused problems when the train finally arrived by clogging up the narrow corridor in the carriage. A few of us were stranded outside, being beckoned on by the train crew desperately wanting to make up time, but we were stuck as there was no room inside the doorway for 10 people and all our bags.

The train arrives, the Dutch prepare to annoy us

One train guard ushered me into a second class carriage, but there was then no way for me to turn round. As I shuffled down the carriage to a doorway, so I could back my rucksack in and turn around, I then got yelled at by another railway worker who must have thought I was heading to the wrong carriage. It was all a bit of a mess, but eventually I found my way to my bunk. 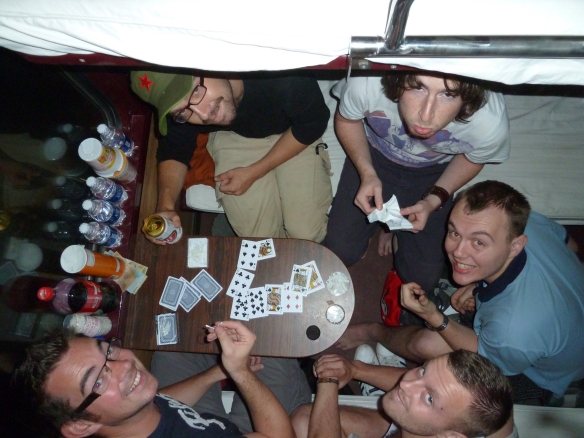 Poker fun on the overnight train

The journey was a lot of fun – it’s a very comfortable train, and I have to say much nicer than any of the Russian and Chinese ones I travelled in across Siberia. We even got given free water, a freshening towel, and – a pot noodle!

The only problem was our poker plan hit a snag when the table was deemed to be too small – a rack was screwed into it for water and snacks. It soon came off with the help of a screwdriver in my multi-tool kit, and play was underway. With a 50,000 Vietnamese Dong buy-in (about £1.50, so by no means mega money!) it’s amazing what you can improvise with. The dealer button for the night was one side of an Oreo biscuit being passed around the table, while the cotton buds were carefully cut in half and became worth 2,000 Dong each. 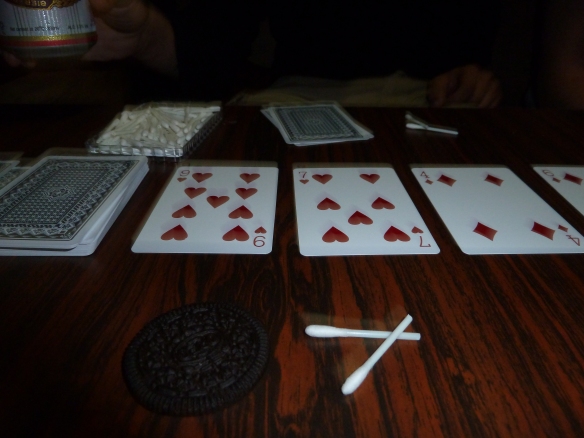 Cotton bud chips, half an Oreo as dealer button. Vegas would be proud!

With a few beers and a pot noodle, the time flew by as we had plenty of banter and laughs as the sun set and we rattled our way through the countryside and north to the Vietnamese capital. It started to get late, and the game was ended with a crazy round of pre-flop raising and betting which saw me all in with Ace Jack. I was quietly confident with the hand, but Ricky ended up taking my chips, and second-place Stephen’s too.

Steven, Malcolm and Verena with Pot Noodles at the ready!

It was 4.30am when we arrived in Hanoi, and we were immediately on a bus for the four hour trip to Ha Long Bay, a beautiful stretch of coastline to the east of the capital and a Unesco world heritage site. 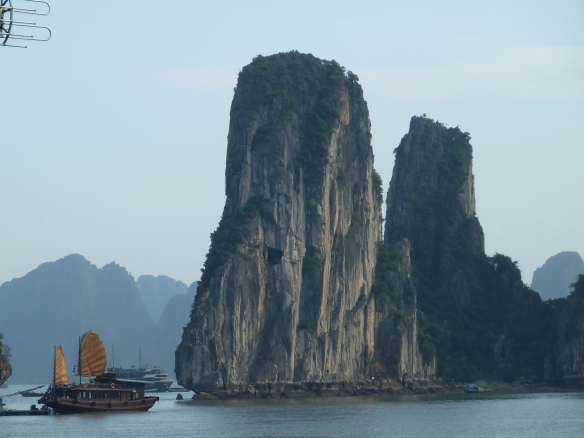 It was nice to see and feel the sun shining on us again as we set off for lunch on a traditional junk. We’d been asked if any of us didn’t want seafood, so of course I opted for the non-seafood option. There was everything from barbecued pork, chicken, beef stir fry, vegetables and chips. Between four of us, one of whom is vegetarian, there was plenty to go at, summed up by a series of photographs secretly taken by Alissa which made it look like I’d enjoyed some sort of private dining experience! 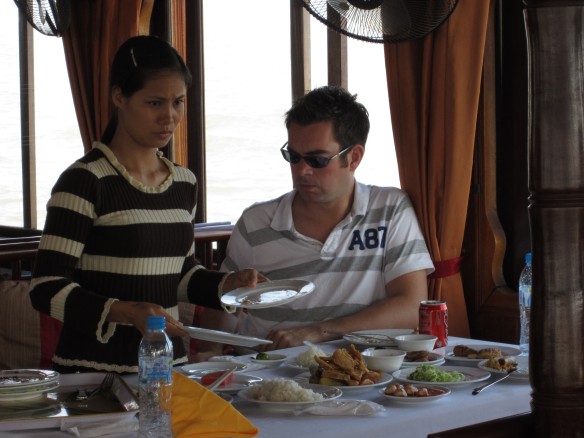 I'll try some of that over there?

By the end of lunch, we were approaching the spectacular limestone cliffs that rise so impressively out of the sea. There seems to be hundreds of them, everywhere you look, each covered in greenery. 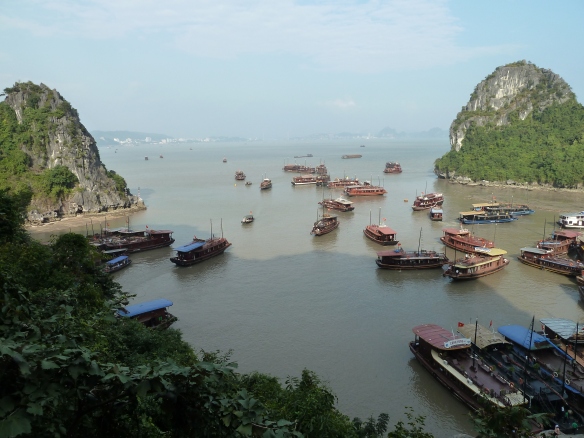 We stopped at one and were taken inside a cave, where apparently the stalactites and stalagmites form the outlines of animals, according to our guide. There was one that looked a bit like a dolphin, but I think much of the experience relied on an active imagination.

In the cave, or a 'Kip' as our guide called it

Colin had by far the best spot of the day however-  high above us he’d noticed what looked like the back end of a horse hanging from the ceiling. Strangely, that wasn’t mentioned in the official tour. 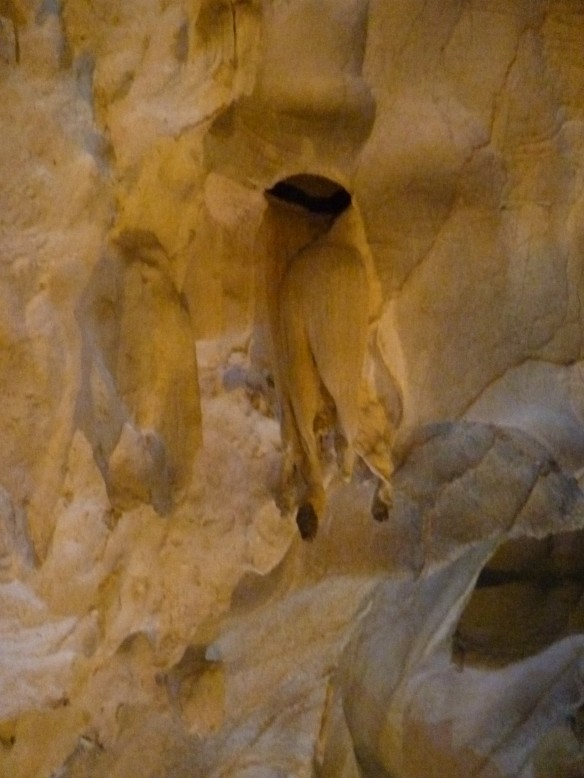 Back on the boat we sailed around the cliffs to a spot where we could hire a kayak canoe. 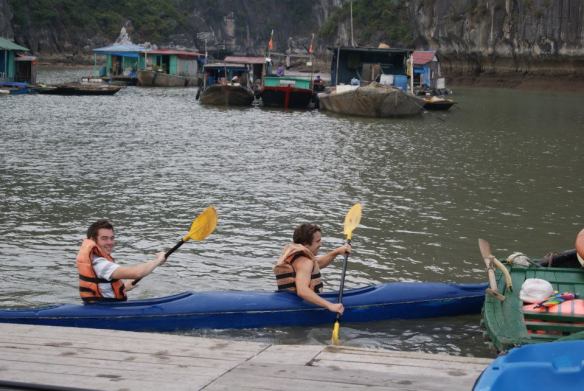 Ricky and I agreed to hire one, and off we went paddling through limestone gaps and tunnels, venturing out into the choppy sea and around some of the rocky islands.

Emma and Megan spent much of their time trying to keep up with us, so we towed them along for a while, and at one point a fish managed to jump out of the water and into their canoe, sparking panic.

It was only a tiny thing, but nonetheless we had to do the manly thing and save them from the stickleback that was harmlessly flapping about in a puddle of water at the bottom of the boat. He swam off in the sea without a care in the world.

With a few beers and photos on the sun deck as darkness fell, it was a very relaxing journey back to the port.

Dinner was at a recommended place called Bamboo Bar, which managed to serve up not only the worst meal of the tour so far, but a good dose of unintentional comedy too. They didn’t have enough chairs, so were were all perched on top of incredibly tall bar stools around tables that you couldn’t get legs under, while the swarms of staff looked like they’d never had more than three customers in at once. I had a fake bamboo tree next to me, meaning the only way I could get comfortable was by angling myself away from others. There were just six menus in the whole place, the staff lost track of who had ordered, food was arriving while orders were still being taken, Dirk was arguing because they’d asked him to pay before the food arrived, and European-style techno music was blaring almost full blast from the speakers.

I ordered a chicken club sandwich, which arrived with one tiny sliver of chicken in it, while Colin seemed to wait an age for his sandwich. At one point, a man walked through the place with two loaves of bread, quite obviously for our orders, while Ricky was left so hungry from the measly portion he tried to order another dish. Except despite being one of the world’s largest exporters of the stuff, the restaurant had managed to run out of rice. It was almost farcical, and with little else to do in the area, many of us went to bed early. 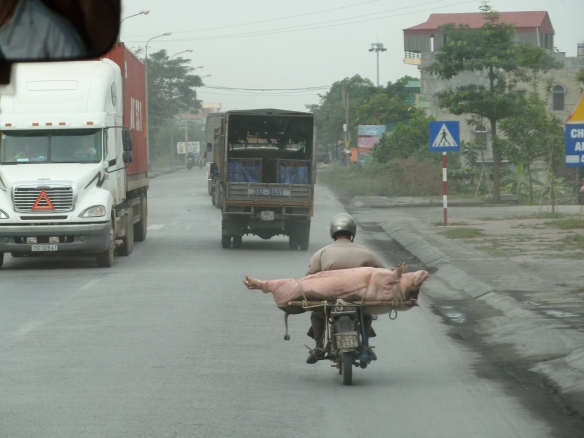 The next day we headed back to Hanoi, with the usual game of ‘what’s on the moped’ from the bus throwing up this little beauty. Sausages for tea?

This little piggy went to market...