My home for a while!

How do you know when to move on to pastures new when travelling? When you get bored? When the weather turns? When you’ve made your way through every dish on the local restaurant’s menu?

No. Its when a complete stranger bellows across a busy street: “You’ve been here ages, I keep seeing you everywhere!”

Or in my case, its when two complete strangers shout that at you. On the same night.

So I was back on Koh Phangan after three days on Koh Samui to visit Dirk. With him on his way back to Germany, I was glad to be getting off the island, and I wont be going back.

Overall conclusions? An island that’s been spoilt by mass tourism, in a ‘Benidorm or Blackpool in Thailand’ kind of way. I know by me being there, and in Thailand in general, I am a tourist and therefore contributing. But the sad thing was, it was dirty, overpriced, the sewerage system can’t cope leaving the streets smelling really bad, the beach needed a serious litter pick, the constant pestering by massage girls, the unfriendly feel about the place. Whether or not its because I’m more used to quieter places in recent weeks, I don’t know.

Beautiful sunset back on Koh Phangan

What I do know is that I feel at home arriving back on Koh Phangan. I checked into my room that I’d managed to book in advance before I left for Samui and had a walk around Haad Rin, stopping for lunch at one of the cafes. It felt like I was among friends again, and quickly got talking to two blokes on a nearby table.

On the way back to my room I bumped into two familiar faces in the 7-Eleven – an Australian named Brad and his French partner Emily. Strangely, I’d also bumped into them the night before on Koh Samui, when I’d decided to take myself out for a night out on my own. It was a strange feeling, walking around a nightclub on my own and having brief conversations with people, but I figured if the music was going to keep me awake in that awful room I was staying in, I may as well go and enjoy it!

It was towards the end of that night that I recognised them – they had been in my taxi just before New Year, and their friend Sarah was a journalist. Bumping into the pair of them again, I was jokingly accused of following them and then we got talking, agreeing to meet up the following night for a few drinks.

Suddenly, I had a new group of friends, and we met up the following day for drinks on the beach. It was while walking back into the town that a random girl shouted at me.

“You’ve been here ages – I keep seeing you everywhere. You were on my boat!”

I had no idea who it was, and for a second shouted back that she too had been here ages in that case, before we began chatting. Her name was Jenny and she told me she lived in Derbyshire. I told her I was from Grimsby in Lincolnshire.

“I know that, well, I know Lincoln,” Jenny said.

She told me her dad runs a business and lives between Lincoln and Newark.

“How did you know that? Nobody knows that place!” she threw back at me, laughing.

That’s when I told her about my job back home and that I happen to have a fairly in-depth knowledge of Lincolnshire’s towns and villages after years of driving and filming in and around them.

Jenny told me how I’d been on her boat over to the island and that she kept seeing me everywhere. It gave me a bit of a complex, that perhaps I was becoming part of Haad Rin’s furniture and that others would see me and think the same. I didn’t particularly want the reputation as ‘that guy with glasses that just wanders around’. I told Jenny she’d obviously been stalking me.

She was fun, but she had a friend with her and I was keeping my new friends waiting so we joked we’d probably see each other at Full Moon.

Incredibly, a few minutes later, the same thing happened with another girl near the beach. She was a bit worse for wear, but was still able to pinpoint where she’d seen me. Growing slightly concerned that the next edition of the Lonely Planet will have an entry about me and where best to spot me. (it would be the café next to Chicken Corner  – superfast wifi!)

It was now officially Full Moon day, the night when the beach fills once again with thousands of people to dance the night away, under the brightness provided by a full moon.

Haad Rin is a town where the whole economy is based on this once a month spectacular. Every shop is filled with bright illuminous clothing, all daubed with bright slogans and logos for full moon. There’s loads of bright fluorescent paints available, glow sticks to buy, flashing lights and hats to spend money on. There are posters everywhere about the event, as well as about Half Moon and Dark Moon events – there is something almost every week to keep the parties going.

It all started back in 1985, when the first Full Moon Party was held at a bungalow outfit on the beach as a thankyou for about 20-30 travellers.The parties carried on and quickly gained fame through word of mouth, and the event now draws a crowd of about 20,000-30,000 every full moon evening, more for big events like New Year.

Its popular as almost every genre of music is played by the dozen or so bars along the beachfront, each with ever impressive sound systems that could shake your fillings out if you stand still long enough.

Its now one of ‘the’ things to do for anyone backpacking their way around the world. Tonight is my third ‘Full Moon’ event in a year, and yet again I locked all my belongings safely away so unfortunately have little in the way of photos from the night.

It began with Sarah, Emily and Brad, who I’ve become good friends with over the last few days. They invited me to their hotel to join in with the body painting workshop that was currently taking place in their bathroom. I went for dots and squiggles down my arms, in some fetching dayglow yellow, stunning pink and a bit of green. A trips to the 7-Eleven bar meant we had some cheap drinks before hitting the buckets yet again. Tony Bucket was delighted to see me back on the island, and naturally gave me a big free hug!

Fire fun - or madness, depending on viewpoint!

It was actually nice to just wander along the beach and take in everything that was going on. We walked up to Mellow Mountain to the extreme left of the beach, with a great view looking over the whole area. The beauty of this huge event is that everyone seems to be in a great mood – everyone is on holiday of one sort or another, and while there have been reports of some violence here and there, compared to some nights out I’ve had at home, its chilled, relaxed and has a very friendly atmosphere.

Most of our time was spent around the Cactus and Drop In bars, which seemed to be playing the six anthems of Thailand on a loop, the main one being Levels by Avicii, with an incredibly catchy chorus of ‘Woah-oh, sometimes’ which has an annoying habit of getting completely stuck in everyone’s heads, while ‘Save The World Tonight’ by Swedish House Mafia, and David Guetta’s ‘Without You’ are other favourites. Infact, you can normally walk along the beach and hear any one of them playing somewhere at any point in the night!

The fire ropes and fire jumps were back out in force, with many having a go, while others – and it has to be said, mainly the girls – had a go at firebreathing. 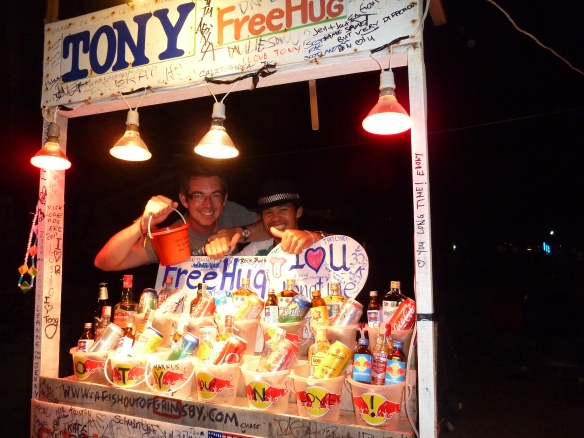 With Tony Bucket saying goodbye - and my bucket!

Sarah, Emily, Brad and I opted for another drink and a bit of dancing on the tables until the sun rose. Apparently, it’s the rules that you have to see the morning in on such a big night. Once again, that mission was accomplished, but with the tide coming in fast, we called it a night. I went home with a souvenir – my last bucket from the party, and possibly my last ever bucket from Koh Phangan.

The next day, as usual, was a bit of a write-off after Full Moon, but I met up with my French and Australian buddies for dinner. It was our last night together before we all go our separate ways – Sarah to Hua Hin in the north, Emily to Burma on a visa run, and Brad on his way towards Bangkok and preparing for his journey home to Sydney.

With Brad, Emily and Sarah at the great Thai restaurant off the main street

I took them to a lovely little Thai restaurant, run by a family, and which serves some of the best food I’ve had. Thankfully, my friends agreed. Over dinner they told me more about Leela Beach, a beautiful beach a few minutes walk from all the craziness of this town. 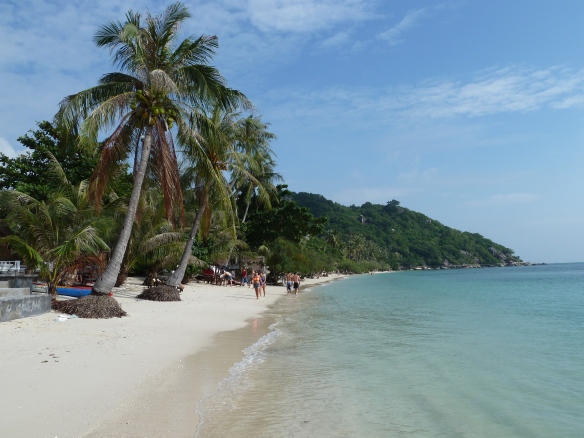 They were right – it was stunning. I’d had no idea the beach existed, yet a few minutes walk up a hill and then down through the Cocohut resort leads you out into a smaller cove, away from Haad Rin and with a typical coconut palm fringed beachfront, idyllic quiet spots and beautiful clear blue water.

I was slightly annoyed I’d not visited sooner. I knew I’d have to leave the next day, as it was time to explore more of the country,

but the beach was beautiful. It seemed a million miles away from the buckets, chicken burgers and pumping dance music on the other side of the hill. It was peaceful, relaxing – and it had wifi for the blog! I spent the entire day with a coconut tree waving over me, watching the waves lap on the shore, writing away about recent events with an occasional swim to cool off. Fab!

Sarah left around lunchtime, so we took a few photos of each other on the beach and said goodbye. She’s also blogging about her journey, having travelled across land from home. Incredibly, along with Emily, they hitchhiked most of their way to Thailand before catching a few trains along the way. Sarah was returning home to her job as a journalist for AFP, full of traveller stories and tales, although she wasn’t looking forward to the cold. 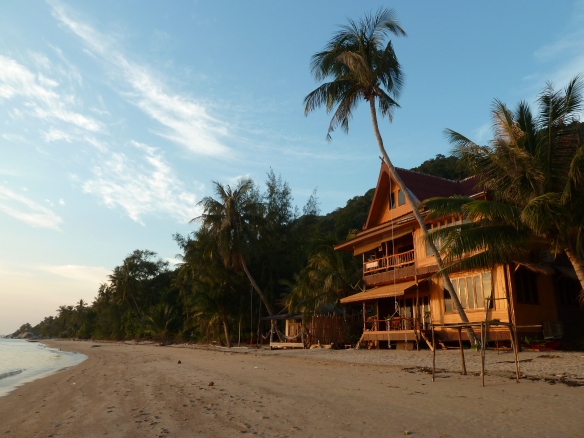 I, however, was looking forward to moving on. I’d already had another tweet from Derbyshire Jenny, winding me up about how she’d managed to escape Koh Phangan’s clutches and wondering if I was still stuck here. I was, but only for a few hours – I’m booked onto a night ferry to Surat Thani, and onwards to Railay in the south. My plan is to spend a cheap week or so there, and then move on.

I watched yet another stunning sunset on the island, had a last walk along the beach where I have so many memories from my three visits over the past year, and said farewell to a great place that had become home. I didn’t particularly want to leave, but as one cheeky redhead from Bakewell rightly pointed out, I had been here ages!

The sun sets on my time on Koh Phangan