My view of South Korea

South Korea wasn’t a country I had on my visit wish-list, but thanks to Korean Air offering the cheapest ticket to Bangkok from Xi’An, I had the pleasure of spending 90 minutes there.

Naturally, my sightseeing abilities were limited somewhat, but from the air there seemed to be a nice beach on the flightpath into Seoul, and the airport had some pretty fast wifi!

I was just glad to be heading to Thailand. I’m booked onto a 30-day organised tour of south-east Asia, starting in the Thai capital, but there’s been a few concerns over whether it would actually go ahead or not due to the flooding, and risk of further flooding, around Bangkok.

Its been caused by a wet rainy season which has seen far more water descend on the country than normal – so much so that parts of the city have been evacuated. It had meant checking with the tour company a few times in the run-up to flying out, but thankfully it was all still going ahead, albeit with a change here and there as railway lines have been flooded. Despite all the doom and gloom reports I keep seeing on the news though (you know what reporters are like!) fellow travellers were reporting it wasn’t too bad.

Landing back in Bangkok was strange. Back in May, I landed at the same airport to meet Cat, a lovely girl I’d met in Hull back in January. We went on a few dates before she left for a year long trip to travel the world in March, but I know that I probably wouldn’t be doing any of my own travelling without her inspiration.

We met at a time when my personal life was pretty tough following a relationship break-up, and the year ahead of me didn’t seem to have any direction. I had little to look forward to aside from focusing on my career, but even that was proving difficult because of the situation at work – it’s always hard when a relationship ends but you still have to work together. But in Cat I found someone who was one of the most thoughtful and generous people I’d ever met, who could make me laugh, was great company and in turn made me realise life could be fun again.

Cat was touring south east Asia herself when she got in touch and suggested I fly out for a holiday. It was a massive step- a leap of faith she called it on my part – as we hardly really knew each other. We even jokingly worked out that our sixth date was two weeks in Thailand together – but going from a few drinks on a couple of nights in a Hull bar to spending all day every day together for two weeks on the other side of the world was pretty daunting for both of us. 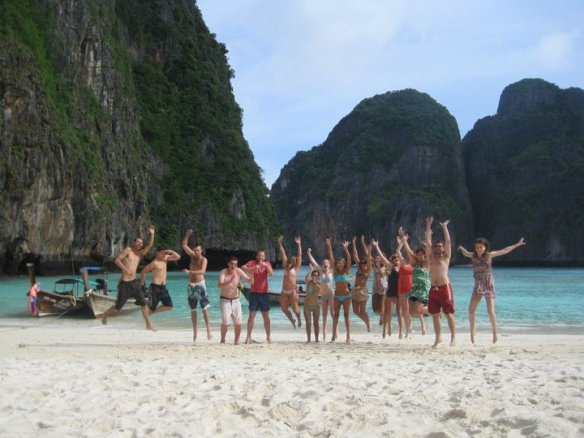 With Cat and other travellers at Maya Bay, Koh Phi Phi, in May

As it happens, we had a fantastic time together backpacking, island-hopping, drinking far too many cocktails and eating more green curry than can ever be good for you. In doing so I discovered Thailand, how much I loved the region and the whole backpacking culture- it was that trip that made me realise just how much I’d possibly missed out on by focussing on my career when all my other friends were doing similar year-long jaunts around the world in their early twentys.

Cat’s stories and passion for the places she had travelled to was infectious. She kept drilling into me how ‘life’s too short’ and how we have to see the planet while we can. Now I was back at the same baggage carousel at Bangkok’s main airport six months on, waiting for my backpack to appear once again, but this time it was the first month of my own world adventure, and following in Cat’s footsteps by doing exactly the same tour around the Thailand, Cambodia, Laos and Vietnam.

Suddenly the time that had passed in between my arrivals at Bangkok seemed to disappear. I remember my nerves from that day in May and seeing Cat’s equally nervous but smiling face waiting for me at arrivals. It all felt very familiar, and it was good to be back, but it was a strange feeling to be there on my own.

I’d decided to stay in the same hotel we stayed at earlier in the year, the Bangkok Center Hotel, mainly as I knew exactly how to get there and the fact my tour starts from there in a few days time. It cost more than id been paying, but felt I needed a bit of a treat – a few days of comfortable privacy, in a big bed and with my own bathroom. Already that seems like a luxury! 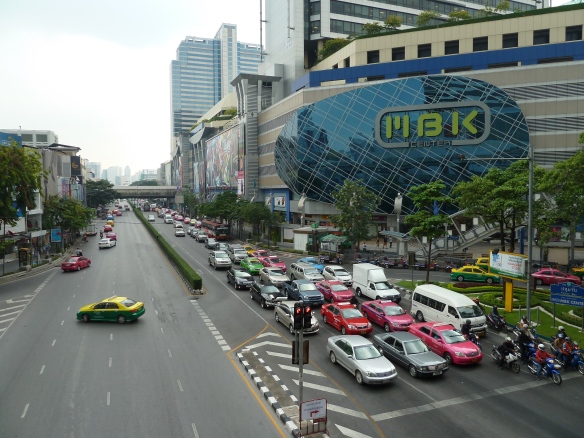 I’d also decided the next few days would be relaxing after a few very busy weeks. It was nice to go to sleep without setting the alarm and having a lazy morning before heading to the MBK shopping centre Cat had taken me to. This was the place I knew would be able to sort out my iPhone – there’s a whole floor dedicated to Thai whizkids who can unlock, repair and in some cases completely rebuild almost any electronic device. After almost a month without it following the Apple update which cleared everything from it, I’d got used to seeing my iPhone as a useless lump of weight in my bag.

Sure enough, after just two hours and £10, it was back in working order again, completely unlocked and with an international simcard. I got my watch fixed for £1, and stocked up on a range of suncreams and insect repellent that id not bothered packing back home, mainly as Siberia didn’t really threaten on the sunburn front. 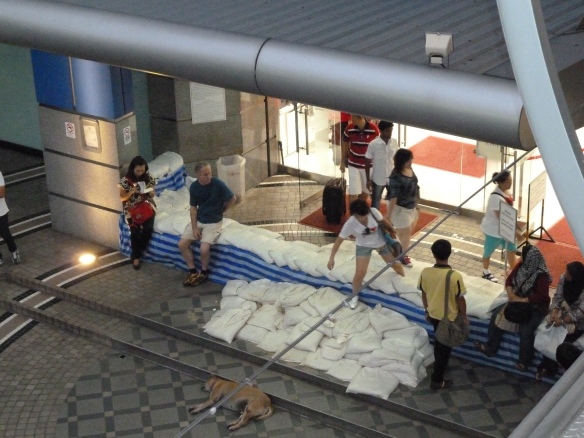 You become an expert at sandbag hurdles

It was clear however that Bangkok wasn’t out of the woods when it comes to flooding. There were sandbags absolutely everywhere, while businesses have built makeshift walls around them to try to keep water out.

There were scores of buses, cars – and strangely, ice cream vans – parked up along the raised motorways. Taxi drivers I spoke to told me how the floodwaters were only two kilometres or so away from my hotel in places, and that they were expecting it to eventually reach the city centre. 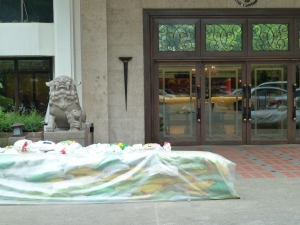 Emergency flood centres had been set up all over the place, while donation boxes are in almost every shop. I donated some pencil crayons and colouring books at the airport collection, as they’d been in my bag incase I came across any youngsters at some of the poorer places I’d been visiting in Mongolia. They joined other kids toys and crayons that hopefully will cheer someone up a little. The rest of my time in Bangkok was spent uploading a backlog of photos and posts to my blog, which had been banned in China, while I also sent a box of books and souvenirs from the trans-Siberian part of my trip home to the UK. 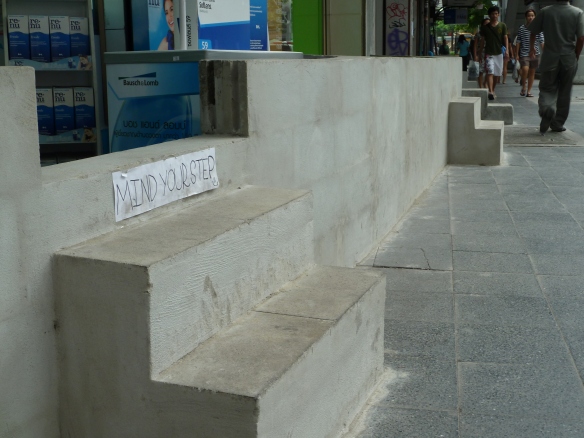 In reception at the hotel, my name was on a list of 13 or so other names that form my tour group with Gap Adventures. When I first arrived, it was strange to look at the list knowing they were the people who would form a huge part of my next few weeks of travelling, yet I had no idea who they are. Before long it was 6pm on Friday, November 11, and the time for the reception meeting to be introduced to everyone.

It was a nervous start to the meeting, everyone seemed quiet and subdued. A lot of people had only just flown into Thailand and so were still getting used to both the heat and the time difference. We started with a few introductions and soon worked out who was who. There was an American, a Canadian, two Germans, a girl from Switzerland, an Australian, a Scot and six of us from England.

Neon and madness on the Khao San Road!

It seems to be a really good mix of people, and we were soon being loaded into tuk tuks for a Thai green curry on the famous Khao San Road. Before long, the banter started to get going, fuelled by plenty of large Chang beers. John, an Aussie, is a fellow journalist, working for a Fox sports network in Melbourne , so we already had plenty in common, including a shared sense of humour.

A deal being struck for Colin's hat!

We moved outside for a few more drinks, taking in the atmosphere and getting to know one another better. There was a steady stream of hawkers coming up and offering a variety of daft things to buy. We managed to keep them all at bay, until the alcohol fuelled a purchase of a daft hat for $2. It was a joint purchase by John and I for Colin, who is here with his partner Sarah from Nottingham.

Naturally, Colin had to wear it, and he particularly enjoyed his close encounter with the sales lady and her pretty nifty dentistry.

Ice firmly shattered, we headed back to the hotel in another fleet of tuk tuks. Somehow, despite three biggish blokes being in the back, our driver managed to pull off a number of wheelies along some busy Bangkok streets. It was all highly entertaining until he managed to wheelie off into the distance with around four quid more than we’d agreed in his pocket. Still, it had been a great end to a good first night on the tour.

It’s great to be back in this part of the world, and already i’m realising exactly why it inspired me to come back and to see and experience more of life over here. Tomorrow we head to Cambodia.