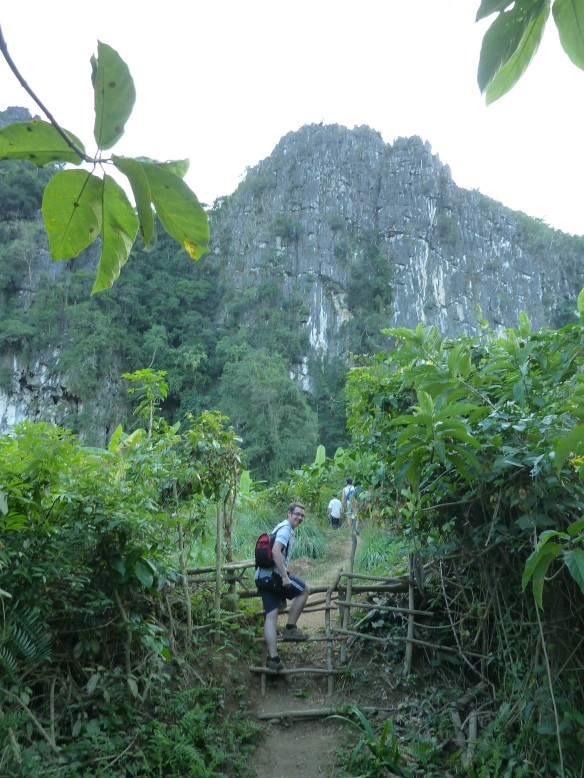 Running for the hills

The award for the most stunning scenery on my trip so far has just gone to Laos.

It had been an incredibly long drive out of Vietnam and into this relatively unknown country, but the morning of our first day revealed exactly why this country is seen very much as a hidden gem in South East Asia. 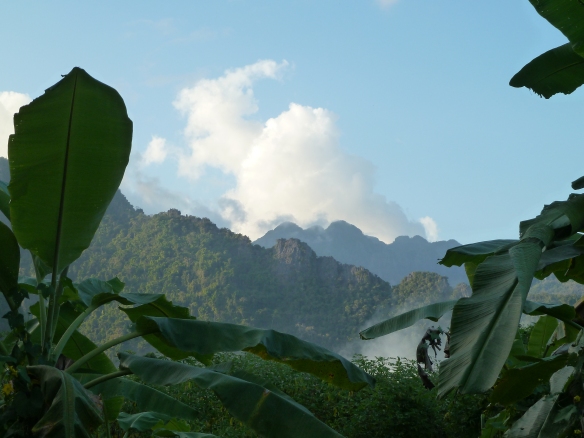 The greenest jungles densely cover rolling mountains, rivers and streams intertwine through the undergrowth, deep red sands and soil contrast with the blue skies. Tall palm trees tower above the main jungle canopy, while eagles fly above. If a dinosaur suddenly appeared drinking water by a river, it would hardly be a surprise. With minimal human impact, it really does resemble the scenes out of the film Jurassic Park. 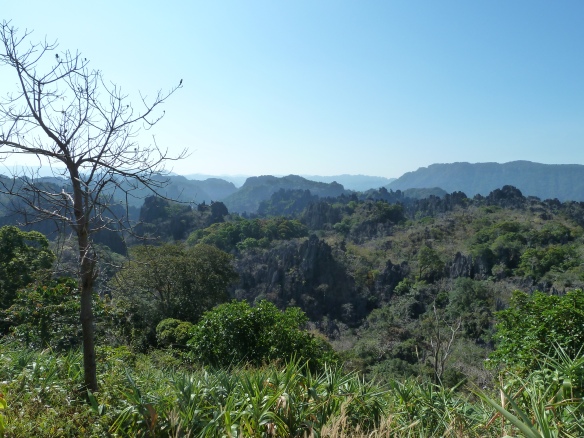 We left Vietnam shortly before 7am for the 10-hour drive to the border point. It was an incredibly long drive, but with our much smaller group now, there was plenty of room to spread out on the bus. With us are our new companions, a Canadian called Jaclyn, who works as an addiction counsellor back home, and a German couple. Unfortunately I’ve not yet managed to get their names, as they seem a little reluctant to want to talk to us. 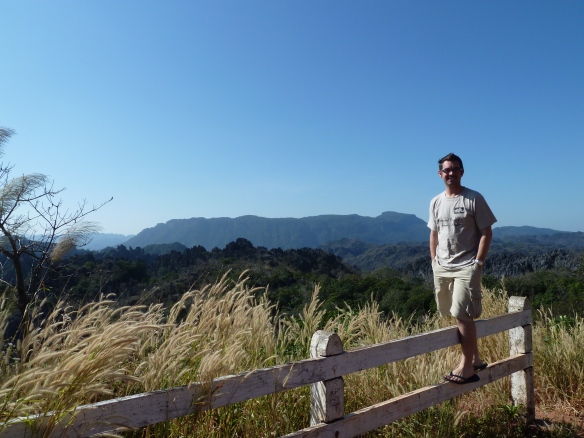 The journey took us through rural life in Vietnam, the cityscape and motorbike mecca of Hanoi turning slowly into rolling paddy fields, jungles and watering holes for a growing number of water buffalo – many of which being used by farmers to haul goods to the market.

There were a few stops on the way, but most of us managed to grab some sleep, especially Ricky who has started entertaining us with his variety of sleeping positions. 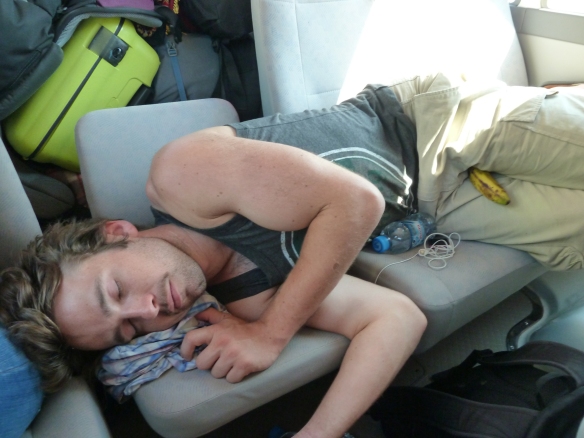 We left his banana well alone

Eventually we began to wind our way up some mountain roads and towards the Nampho International Checkpoint, the exit point for Vietnam and the entry point for Laos.

It was a shame to be saying goodbye to Vietnam. After two weeks in the country, it still didn’t feel like enough, that I had only just scratched the surface. There is so much to see and do, particularly regarding its history and conflicts, that it needed at least another two weeks to do it justice. Ho Chi Minh is definitely a city I’ll visit again sometime, and the beaches still need discovering. And besides, when I need a new suit, I’ll just have to pop to Hoi An to see my new tailoring friends! 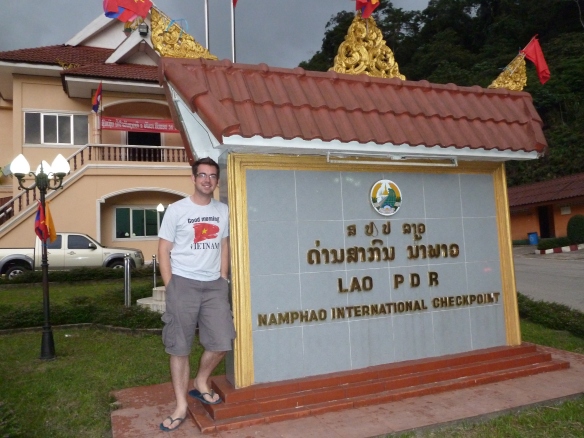 With border formalities over, it was starting to get dark as we made our way to a guesthouse in a nearby town, but we were rewarded with a particularly beautiful sunset over the mountains. 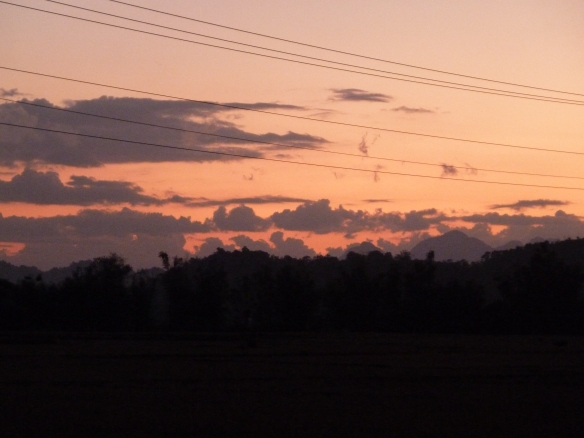 The next day was another major travel day to the capital, Vientiane, with hour after hour spent on the bus, driving through spectacular countryside, over glistening rivers and through countless villages made up of old wooden homes on stilts. 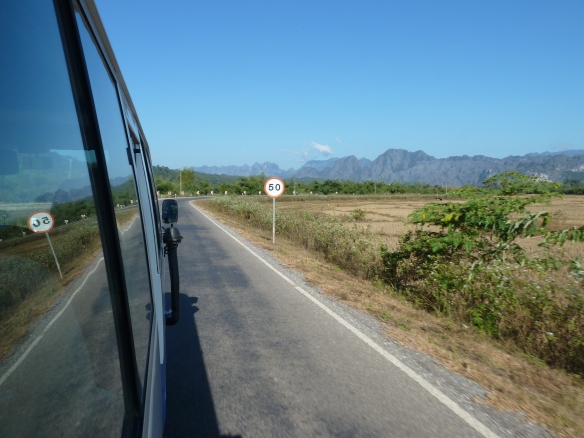 On the road again!

We stopped in one such village for a break, and discovered the iced coffee was particularly good, not just because it came in a plastic bag, but because it actually tasted like coffee. A few of us, particularly those of a North American background, are missing the occasional fix of a good brew, and some we’ve tried to drink have been pretty disgusting. 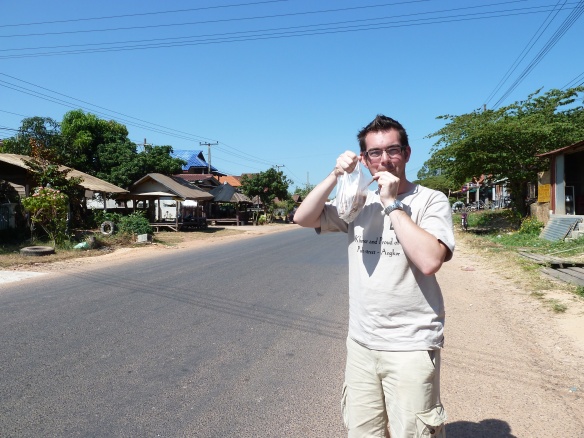 Cost cutting at the local Starbucks

Vientiene was only a short stop, arriving mid afternoon. We saw one of the main landmarks, Patuxai, on the way into the city. I thought it looked familiar – it resembles the Arc de Triomphe in Paris, which I thought was a hark back to the days when France occupied the country, but infact it’s a memorial to those who were killed in liberating the country. 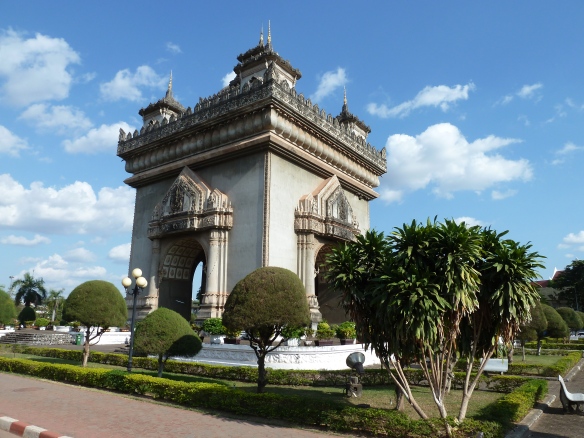 Taken from the bus!

Strangely, it was financed by America and built with concrete that was supposed to have been used for an airfield during the Vietnam war. The Americans then gave the money for a new city airport, but instead the Laos government used the cash and concrete to build the monument – and now its nicknamed the vertical runway!

After so much travelling, and after hearing there wasn’t a great deal to see in the city apart from more temples, I decided to spend a couple of hours relaxing and taking in the atmosphere. Ricky and I enjoyed drinks and a bite to eat at a nearby bakery, and we sat outside as the sun set. 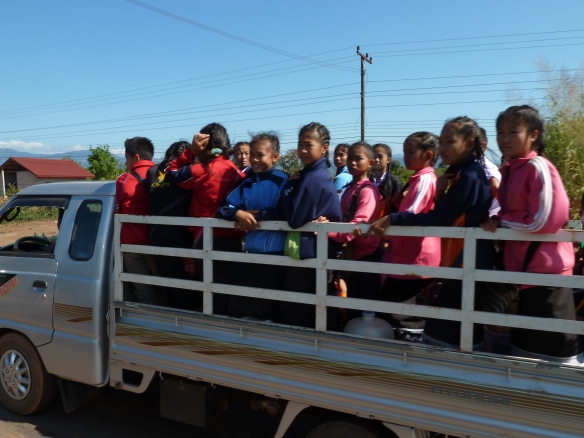 It was yet another early start the following morning as the tour headed to Vang Vieng, a place well known on the traveller circuit thanks to its river tubing – and river bar –exploits. We arrived around lunch time, and met up with Emma and Megan who had left the tour in Hanoi to continue their own travels. We ate at an organic restaurant before working out what we wanted to do in the afternoon. Fon suggested we visit some caves, but to do that we’d need to hire a bicycle or a moped. With time and our falling energy levels against us, the bicycle option was out, and so we hired some mopeds for about £4.

While I’ve ridden mopeds before, I must admit I’m still a bit wary about getting on one. Its not necessarily my own skills I’m worried about, but those of everyone else who uses the roads here, combined with the fact most are full of potholes and ruts. However, it was the only way to get to where we needed to be, so Dirk, Steven, Ricky and I all hired automatic ones, while Jorg, part of the German couple, hired a manual motorbike as he is the only one with an actual motorbike license back home. 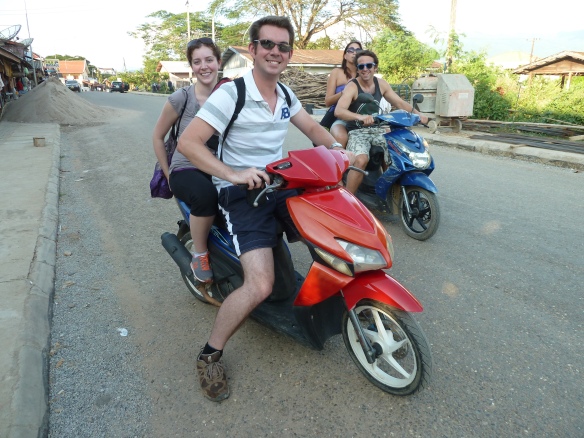 We took the bikes for a test, and while mine felt like all the nuts and bolts needed a good tighten up, and the front wheel was at a bit of a funny angle, it rode quite well. There was no fuel in the tank, so a few of us filled up and then headed back to the hotel. Steven was there collecting things from the room and still needed fuel, so to save time I took his bike. Ricky and I had only just got around the corner when the one I was riding conked out. I started to push it on the half-mile or so walk to the petrol station, before Ricky offered to run with it as a bit of a work out. I then took control of his bike, which also stopped working a minute later.

By now, there were some concerns, but after taking the latest one to die back to the place where we hired it, I was given a water bottle full of petrol which I then ferried back to Ricky. It was a huge faff, but thankfully we were all soon on our way.

Most of us took a passenger with us – Jaclyn joined me for the ride – and with our tour leader Fon’s words of ‘be careful’ ringing through our ears as we left the hotel, the group of us tentatively set off down the road. That’s when disaster struck the German couple, as somehow on a right hand turn Jorg, the only one who officially rides motorbikes back home, managed to plant his front wheel in a pothole and catapulted his girlfriend over the handlebars. There was a lot of concern from all of us as they picked themselves up off the gravel track, though sadly the girl, whose name I cant remember, probably because of the way she wanted very little to do with me, decided to tell us all to stop laughing at her. Of course, we weren’t, but it was a bit of a turning point in relations between them and the group. 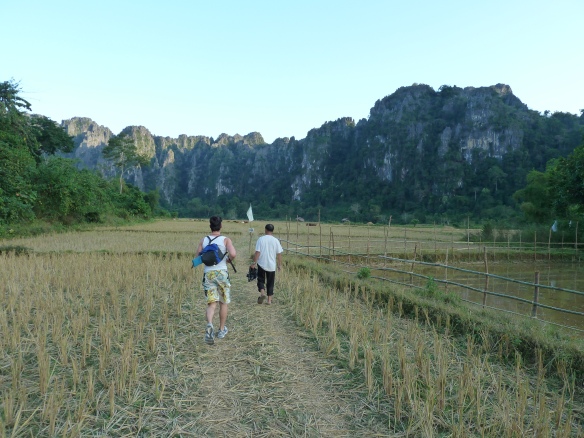 Heading to the caves

Shaken but uninjured, they joined us as we carefully made our way along the potholed track to a cave. It cost us 10,000 Laos Kip to visit, and a guide took us through fields towards some imposing limestone cliffs that formed part of all the mountains around us. 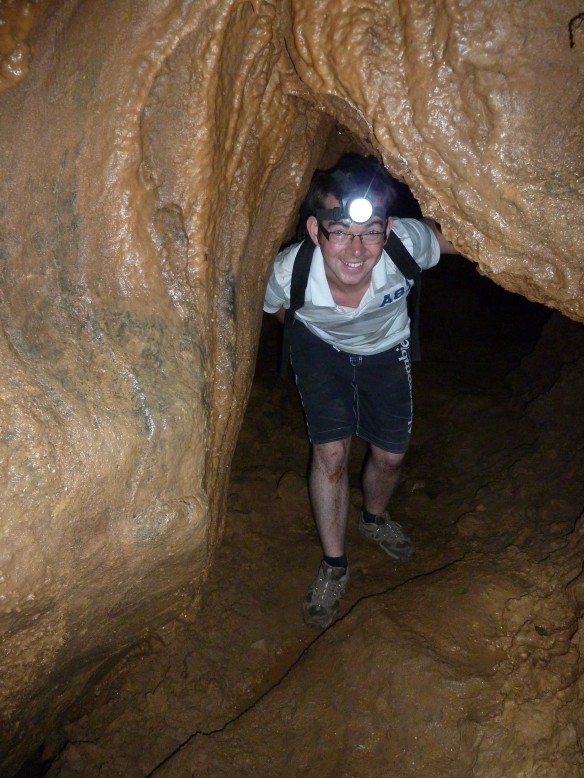 Headlamps on, we followed the guide up slippery steps into the hot and humid cave. There were no lights in here, unlike the caves at Ha Long Bay. For me, this was as close to proper caving as I’ve come. The walkway took us through narrow gaps in the rocks, over crevices and around stalactites and stalagmites, beyond which are impressive rock structures and shapes. It took about 10 minutes to reach the end of the train through the rocks and humidity, but it was great fun. 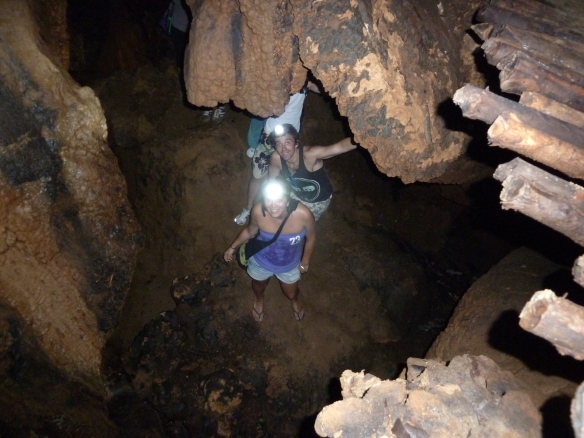 By the time we’d turned around and reached the fresh open air again, we were all dripping with sweat. Thankfully there was a lagoon beneath the cliff, so we all jumped in and had a lot of laughs in a huge waterfight. 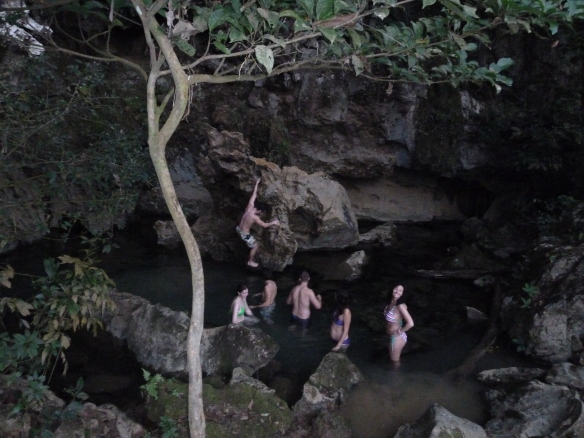 The laughs soon came to an end when Steven’s motorbike yet again decided it didn’t want to play ball, just a few metres up the dirt track from the cave. With a good three miles to go before we reached any civilization, we tried desperately to fire up the engine, but it was having none of it. We worked out the battery was flat, but the other bikes only had a battery lead with about four inches of slack. We were about to try turning one bike on its side to try to connect a working battery to Steven’s stranded machine when two locals in a pick-up turned up, and thankfully offered to run said heap of junk (the bike, not Steven!) back to the town.

Despite an offer of some cash by way of thanks, the pick-up driver wasn’t interested – yet another example of how people in this part of the world often go out of their way to help others. Meanwhile, the German couple were quibbling over a demand for five Euros to repair the damage they’d caused to their bike when they crashed. Eyes were rolled. 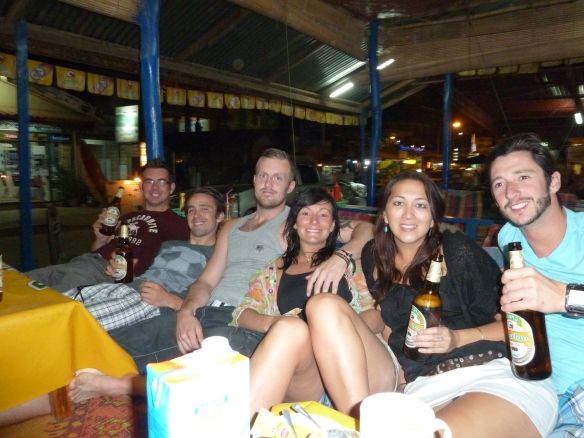 Dinner that night was in one of the many ‘Friends’ bars in the town, a place where people can chill out on comfy laid back seats and watch that American ‘comedy’ that my friends know I’m not a great fan of. 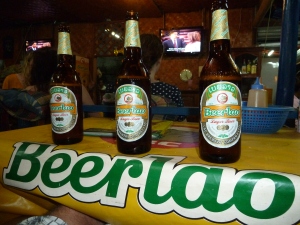 It was nice to sit with a Beer Lao and relax though, watching bedraggled people walking by having dropped off their giant inflatable rubber rings at a nearby Tubing store.

Later that night we went to Q Bar in the town, and despite the fact it was relatively early in the night, we found utter carnage! People were covered in permanent pen, in various states of undress, varying levels of drunkenness and many were packed onto a stage dancing the night away, clutching buckets of Laos whisky and coke. It was only about 10pm, but then this is Vang Vieng and the home of Tubing… 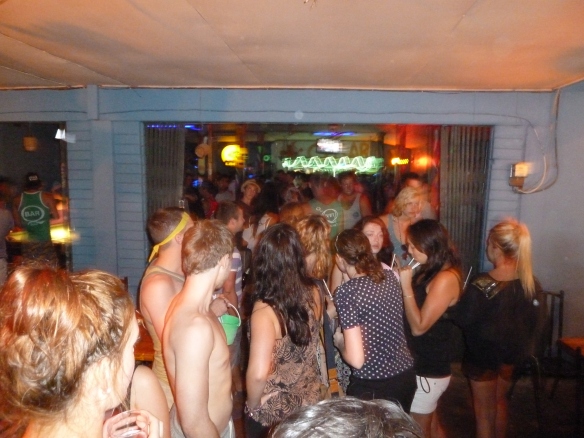 Q Bar...this could get messy!