I woke up in a panic – I knew I’d pressed the snooze button on the phone alarm, and I had the guy who runs the hostel waking me up. I had a trip organised to Lake Baikal, the world’s oldest and deepest lake, and the pick-up was at 9.50am.

Thankfully, I still had 20 minutes to get ready. I’m staying at the Nerpa backpacker’s hostel in Irkutsk, close to the city centre. It’s clean, homely and friendly, everything you need when you’re adjusting to life as a backpacker. They’d booked me a trip to the lake after I saw it on the noticeboard, and it was one of my main reasons for stopping off in the town – the other reason being that it has a Mongolian consulate, so I can get a visa for the next country on my trip.

I was under the impression that it was an organised trip, and as the minibus turned up, I was quickly taken to the town’s market. An hour later, and the minibus now full of locals, we were on our way to the lake, 60km away. It was a pleasant journey, a couple of passengers tried talking to me and kept repeating the word ‘London’ with smiles and a nod. I kept smiling and nodding back!

The journey took me through some fantastic countryside – long straight roads cutting through evergreen forests, rolling hills and villages made up of tiny wooden huts, a typical sight in Siberia. It did not feel like the Russia I had imagined – it felt much more like I was in the French Alps. It was about an hour before we reached the lake, stretching out for miles and meeting snow-capped mountains on the far side. 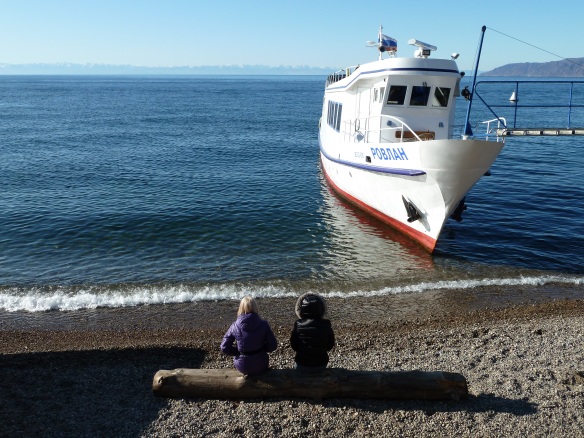 We arrived in the lakeside town of Listvyanka, the minibus driver gave me a list of car registration numbers I could get a lift back with, and I went off to explore. Some fellow backpackers told me there was a ski-lift to take me to the top of the hills around the town for a great view of the lake, so finding that was the main objective.

I quickly found however that the town was very spread out along the main road at the edge of the lake. I read my guide book on the shore for a few minutes, before deciding to walk to the main village.

The water was incredibly clear and blue, lapping onto the pebbly beach. On the horizon, snow-capped mountains, and the borders of Mongolia and China.

The sheer scale of the lake is immense – it’s known as the ‘Blue Eye of Siberia’ for a reason. It’s the world’s oldest lake, formed 50-million years ago; the deepest at 1,637m (5371ft) and is among the largest lakes on the planet, stretching 400 miles long and between 20 and 40 miles wide. There’s so much water in it, that if everyone’s taps ran dry in the world, Lake Baikal could keep the entire population of Earth going on fresh water for 40 years! And its so clear and clean, that the locals simply put a bucket in and take it home – I even saw one man who works at a diving company filling two cups, presumably for a warming cuppa, straight from the lake.

Siberian village by the lake

The guide book revealed how it was a nice walk to the town’s church, nestled at the back of the town in a valley. 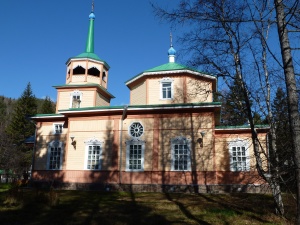 The church, minus its 5-star toilets!

Walking through the streets was like walking back in time – people were in their gardens turning over soil, tending to their vegetables, while rusting cars and tractors were dotted around. Most houses are wooden, many are falling apart, but nearly all of them have beautiful painted shutters adorned with carvings.

One of the reasons for finding the church was because the guide book told me some concessions had been made for tourists, and that there were some new five-star toilets located behind it. I thought that would be a ‘convenient’ stop after a while travelling, so headed towards them. There were some cheery waves from people as I walked past, and after about fifteen minutes, I found the church…and the ‘five-star’ restroom. Needless to say, I didn’t use it, but did spend the walk back to the main road chuckling about how many other travellers must have followed the words of the guidebook expecting to find a shiny, sparkling w.c, maybe with hand driers, basins, mirrors, the works – only to find a shed and a hole in the ground!

I walked along the path and headed to the easternmost side of the town, which looking at the map seemed to be a short walk. I failed to look at the scale, and three kilometres later, I eventually found the Baikal museum. It cost about £3 to enter, but I’m afraid to say it has to go some way to rival The Deep. There were a couple of endangered freshwater seals swimming around in a tank that was clearly far too small for them, along with a few other exhibits of wildlife unique to the lake, including the Omul fish. People were selling these fish all over the place, normally barbecued and at the side of the road. Its supposed to be lovely, but my dislike of fish makes this delicacy off-limits!

My map shows the hilltop lookout as being behind the museum, so I set off to try and find it. Yet again, Russia’s aversion to maps and helpfulness means I walk around in a big circle for a while, getting trapped on some form of wooden walkway, and then asking the person at the museum which way it was. Helpfully, she gave me instructions in German, although her pointing gave me the general idea of where to head.

As I walked up a dusty track, and then climbed steps to another dusty track, I wondered if I was on yet another Russian wild goose chase. There was no ski-lift to be seen, just hills and trees. I walked up a hill, and was about to head through some gates, when there was a whistle from behind. One of the locals, wearing a traditionally big and fluffy Russian hat, motioned me to turn left – mainly as I was about to walk up to a military camp! 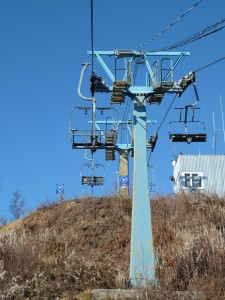 After what seemed like an eternity aimlessly walking up dusty tracks, looking for signs and wondering if a hilltop viewpoint actually existed, I began to see a metal building and heard a familiar noise – the low drone of a ski-lift winding its way up a hillside!

It was a fairly hefty £4 to take the lift up, but after a good few hours hiking, I was ready for a rest, and I rest I certainly got. It was possibly the slowest ski-lift in existence! I’d have probably crawled up quicker if I’d tried, the chairlift slowly bumping over each wheel on the pylons at a boredom inducing pace, but it gave me a chance to analyse the slope below me, obviously a piste when it snows, and by the looks of it, a short but challenging run! 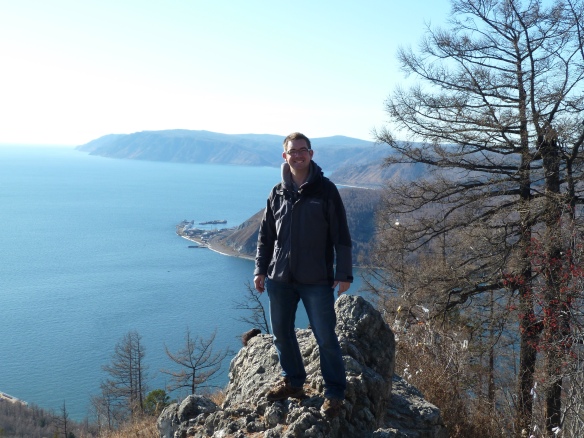 Success -I found the top!

The wait was worth it, the view at the top was spectacular. The sun was in completely the wrong place for photography from the peak, but I still managed to get some nice shots. Below, the lake flowed into the River Angara, which itself flows all the way up to the Arctic Ocean. I met an American man from Charleston in the States, he’d asked me to take a photograph of him and his wife at the top, and he seemed as surprised as I was to find someone else who speaks English! They are few and far between around these parts, so we both enjoyed finding out about each others’ travels. He was there with his Russian wife –they had married in May and so had both now travelled to her home country to meet family.

The view from the top!

Also at the top was the Russian man in the furry hat, the local who’d whistled at me. He asked me to take a photograph of him on his phone, and then motioned to the sun and managed to gesture enough to me that it was a good day to visit the top of the hill. He seemed to enjoy telling me all about the lake in his native language, motioning how deep the lake was, how big it was, the fact Mongolia and China are on the other side.

Clearly proud of living there, and now having the opportunity to show off this amazing natural wonder to tourists, we both leaned on the railings admiring the view for about an hour, taking it in turns to try to explain different things to each other. He would be giving me facts in Russian and hand signals, at one point writing numerals on the ground (it was how deep the lake was) while I showed him maps of where I was travelling to and showing photographs of life back home (Russian people absolutely love this!)

Eventually I decided to go – he shook my hand, smiled, and said pretty much the only bit of English he knew: ‘Goodbye my friend’

Mountains in the distance

I decided to walk down the hillside, and comprehensively beat the chair lift down to the bottom, before walking the three kilometres back to the marketplace. While there, I bought a barbecued kebab. I asked if it was beef (‘rosbif’) but he just said it was 150 roubles and gave me it anyway. It came with a blob of ketchup and some onions, and it has to be said, was very, very nice. I sat on the beach eating the meat – be it beef, pork or yak – watching as the sun started to drop behind the mountains. There was a really nice atmosphere, people strolling along the prom, sitting on the beach, laughing and joking, despite the fact temperatures barely rose above freezing point all day. It was so cold, my camera battery died really quickly, so I wasn’t able to get any shots of sunset over the lake, but it was stunning.

The man from America walked past me and said hello again, and asked if I’d had a good day. He joked if I didn’t hurry up, I’d miss my bus – but I had one more task before heading back to Irkutsk…

Legend has it that the Baikal waters are holy, and that if you dip your hands in, you will add an extra year to your life. Well, I’d done that just to wash the greasy mess off from the kebab – but if you dip your feet in, apparently you add another five years on to your life. So off came the shoes and socks, and I felt a bit stupid as I walked over the cobbles and went for a paddle.

It was icy cold – the lake freezes over with three metres of ice for much of the winter – and it was almost unbearable. But being slightly superstitious, it was worth it for another five years!

As for the legend that a swim in the lake adds an extra 25 years to your life – judging by the temperature around my feet, I don’t think I’d have seen the sun finish setting that day if I had gone for it.

Some superstitions are worth forgetting about!